"Everything is Analog, in the end"

I'm a Canadian technical writer based in Berlin, Germany. I write about topics such as technology, usability, creative writing and Canadian history. I tweet at @glennjlea. Read more about me and on LinkedIn.

I am keenly interested in usability and Human Factors but I admit I didn’t know who John E. Karlin was until I read an article in the New York Times a few years ago. John Karlin, a South African, is widely considered to be the father of human factors engineering. After moving to the United States, he worked at the famous Bell Labs from 1945 until his retirement in 1977. According to the New York Times article, “He was a quiet, unassuming mathematical psychologist, electrical engineer, and professional violinist.” He developed a new approach to technology design, surprising in its simplicity and surprising that no one had ever thought about it before - he believed that the human experience was the number one priority when designing human-technology interactions, not the “coolness factor” of the technology itself. 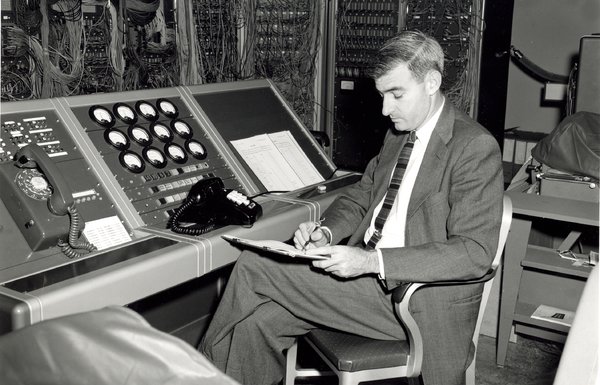 In fact, Karlin was responsible for developing many of the human-technology interactions we take for granted today. For example, if you are old enough to remember, Karlin designed the placement of the numbers on the dial paid on telephones as well as the length of the telephone cords. He also analyzed how to best arrange the numbers on a number key pad used later on telephones. He even considered the best shape for the keypads. Look at the number keypad on your keyboard. It was his design.

“Technology must be trained by humans, not the other way around

The failed technology landscape - “Yes, but can your grandmother use it?

Consumer technology is littered with hundreds of products that people are expected to use, despite little or no sense of usability. The most reviled is, of course, the old VCR player - if anyone still remembers these horrid devices. Most people could insert a VCR tape into the slot and start playing it, but when it came to programming the device to record a program or other non-standard tasks, forget it. Even today, most remote controls for TVs and DVD players contain a bewildering number of buttons and options.

Yet consider the telephone (before they too became mobile smartphones). They were so simple to use that even an elderly grandmother with barely any sight could use this device to call their doctor or children, or anyone else if they had an easily remembered phone number. The underlying telecommunications technology was extremely complicated with switching, protocols, cabling, accounting and charging, and so on. But for a user, all they saw was a simple dialpad.

This was the genius of John E. Karlin.

He considered a device as needing training. The user didn’t need training.

What training can you give to an elderly grandmother? She knows the phone number of her child. She sees the dial. All she needs to do is turn on the device by picking up the handset, wait for a dial tone, put her index finger in the appropriate hole corresponding to the first digit and turn the dial clockwise. She then repeats the procedure for the next number, and so on. She only needs to dial the numbers in the correct order. Amazingly simple yet the underlying complex technology is completely hidden from her.

The question is - what does the device need to do in order for a human to use it not how can we train a user to use the device.

As we just noted, the telephone is part of an enormously complex system. Yet access to this complexity requires no more than memorizing a series of numbers and performing really simple steps to connect with another phone elsewhere in the world!

For Karlin, even these simple actions needed a rethink. How should the dial be trained so that technology does not get in the way? His solution was not to hide the numbers while dialing by putting them outside the ring.

With the development of the number pad, Karlin used the same analysis for this innovation. How should the number pad be trained to be used by a human? Look at your digital telephone and therein lies the answer.

After observing users interacting with various iterations of the number pad, he decided that users made less mistakes if the lowest digits were arranged on the top row starting with “1” at the top right hand corner to increasingly higher digits on subsequent rows below. The 0 (zero) was placed on the lowest row. This number arrangement is still used on the most advanced smartphones today.

This reflected another basic principle of human-machine interaction - the mind considers the top left hand corner to be the most important location in any device. It is where our minds naturally attenuates to when looking at a device and trying to figure out how to use it.

In computer keyboard technology, the same principles apply. Keyboard number pads have been adapted from adding machines, as this was the primary task of computers in the early days of computing. The numbers are arranged based on how humans use the device, not on the most logical arrangement for the technology. After all, keys could be placed according to their unicode numbers and we all know this would be completely daft.

So, form follows function. Computers for computing. Telephones for communication.

What then is Human Factors?

What is this science/art that John Karlin helped found?

Human Factors is a “branch of industrial psychology that combines experimentation, engineering and product design”. Human Factors focuses on what a user is “mentally capable” of actually doing with a specific technology. It then seeks to design and improve the technology so that the user has little or no “cognitive dissonance” between what he or she seeks to do with the technology and what it is actually capable of doing. It is, therefore, the cognitive counterpart to the physical study of Ergonomics. It focuses on what the mind thinks in a given situation and with a given technology rather than what a typical human is physically capable of doing in a giving situation and with a given technology.

“Human-factors studies are different from market research and other kinds of studies in that we observe people’s behavior and record it, systematically and without bias,” Mr. Israelski said. “The hallmark of human-factors studies is they involve the actual observation of people doing things.”

John E. Karlin founded a systematic and rigorous study of the observation of human behavour to understand the how users think and make decisions on the use of a given technology in a given environment. He placed the responsibility for training on the technology not the user - the user is what he or she is. It is the technology that must conform to the user, not the other way around.

You can read the New York Times article here.